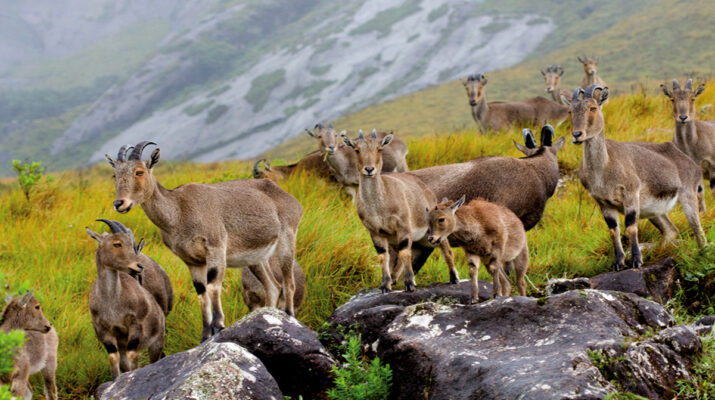 Eravikulam National Park is located in the Kannan Devan Hills of the southern Western Ghats. The Park offers the visitors with a magnificent view of unending grassland spread over the huge rolling hills with tea plantations. The Eravikulam National Park is the first national park to be situated in Kerala. The park covers an area bout 97sq.km. The Park was recognized as a national park in the year 1978, the park was initially set up for the conservation Nilgiri tahr (Nilgiri Ibex).

The national park is a protected area and is divided into three regions - the core area, the buffer area and the tourism area. The tourists who come to visit the park are allowed only to the tourism area that is in Rajamala, the region lying beyond the road entry into Eravikulam.

Also, this park has made a huge record by discovering new bright reddish-orange-coloured frog with multiple glands and extremely short limbs. The frog has been given the name Raorchestes resplendens.

The Lakkom Waterfalls also known as the Lakkam Waterfalls tumbling down the hills originate in the heart of the Eravikulam National Park offering breathtaking views. The waterfall on the roadside in the route from Munnar to Marayoor is easily accessible.

The Kurinji Trail is a soft trekking package that lets you map out your way through the tracks of the Nilgiri Tahr and the grasslands draped in Neelakurinji. This three hour trek is scheduled for mornings and evenings.

The Anamudi peak also known as the Anai Mudi peak is the highest peak in the Western Ghats and in South India, at an elevation of 2,695 metres. It's a popular destination for trekking in Munnar.The peak offers a breathtaking view of the valley and hills around.

How to Get There ?

One can visit the Eravikulam National Park by Airways, Railways or through Roadways.

By Air: The nearest international airports are located in Trivandrum and Coimbatore at a distance of 148 km and 175 km respectively from the Rajamalai National Park.

By Train: The nearest railway station is Aluva which is about 120 km away from Munnar.