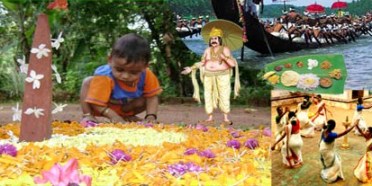 The biggest and the main festival of Kerala is Onam. It is a harvest festival and is celebrated with joy and enthusiasm all over the state by people of all communities.It is celebrated in the beginning of the first month of Malayalam Calendar (Kolla Varsham) called Chingam., this unique cultural extravaganza extends to ten days, the most significant being the first and the last – Atham and Thiruvonam. These are considered to be the most important days.

According to a popular legend, the festival is celebrated to welcome King Mahabali, who visits each year on the day of Thiruvonam to bless the masses.According to mythology, the Bhagwat Purana tells the engrossing story of Mahabali.The story is that once Mahabali wants to become more powerful so he decided to perform an Ashvamedha yagna. The devtas felt threatened so they rushed to Lord Vishnu and pray him to rein Mahabali in. Lord Vishnu takes his fifth reincarnation, Vamana (dwarf) and went to the bank of the holy Narmada River holding an umbrella in his hand. Mahabali stopped him and asked him for anything he desired. The dwarf simply asked him for the measure of area he would cover in three strides. Taken aback by such a trivial wish, Mahabali agreed. The dwarf came in his original form (Lord Vishnu), he took his first step on earth, the second foot was leisurely placed on the heaven and well, you could say that not much was left for the third step! So Mahabali, offered his head for the last stride of the Almighty. Vishnu promptly obliged, thus pushing Mahabali into the realms of the nether world. This wish, more than anything, proved how worthy a king he was. It is believed that since that day, Mahabali comes every year to visit this sun-dappled land of coconuts and his beloved people. This day is called Onam.

The first day or Atham is considered as an auspicious day by the people of Kerala as it marks the beginning of Onam. The most important feature of this day is the making of pookalam which is made by the girls of the house while the boys gather fresh flowers required to make a pookalam.

The pookalam is made in order to welcome the spirit of King Mahabali in whose honor the festival of Onam is celebrated. Everyday fresh flowers are added to the pookalam design resulting in a huge flower carpet on the tenth day.

Thiruvonam or the tenth day of Onam is considered as the big day when entire Kerala is fully decorate with fresh flowers and everybody in new clothes and everyone wishes each other Onam Aashamsakal which translated means Onam wishes to everyone.

The delicious onasadhya, strictly vegetarian feast is prepared on Thiruonam. With over 20 side dishes and payasams served on a banana leaf, it is an elaborate and grand affair.

Some of the cultural programmes during the Onam celebrations in Kerala are Kummatti kali – The Mask Dance, Pulikali / Kaduvakali, Kathakali,Vallamkali, Thumbi Thullal and Kaikotti kali.